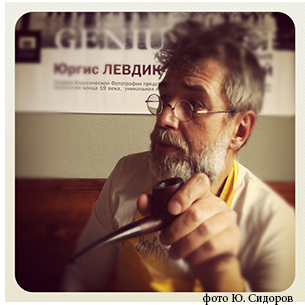 . member of Creative Union of Artist in Russia

. He comes from a rare and ancient family of Zanarewskih

. photographer in the fourth generation, for now the last one of the big genus of photographers

. grandfather – Levdik-Zanarewskiy Aleksandr before the revolution in 1917 studied photography and sculpture in Paris Royal Academy of painting and sculpture. He returned back to Russia after the Bolshevik revolution in 1919 and became the head of first photo laboratory in famous newspaper “Izvestiya“

. Levdik-Zanarewskaya Valentina, grandmother of Urgis, with the help of Urgis’ grandfather learned the art of photography and worked as a photographer till her last days.

. The father of Urgis, Levdik-Zanarewskiy Valentin, was born in 1925 in a family of professional photographers, though he didn’t become a photographer himself, he was highly interested and passionate about photography.

. In the beginning of 1960’s, when Urgis was already born, his father had a serious technical equipment for that time: “Iskra” camera with a aspect ratio of 6x6 and Czech magnifier “Opemus” for projection printing from this format. His photography lessons became a real photographic school of the late 19 century techniques.

. In the beginning of the 90’s of XX century Urgis had met the great Spanish painter and gravure master – Don Luis Ortega, who died at the age of 75, on the 25th of March 2012.

. Subtle tonal transitions in his engravings created by his unique technique of engraving rolls (fineness of lines – 10 per 1 mm ) were able to create such a volume and feeling of air in his works, like no contemporary photo of the end of the XX century could. It was when Urgis set himself a goal to achieve such a feeling within his own photo artworks.

. Contact printing from a negative of a large format on platinum-palladium paper, prepared manually using the technologies of the end of the XIX century allowed to reach the effect of lightness and air that exist in the gravures of Don Luis Ortega.

. This exhibition is the result of his research into the rarely used, old photographic technique of platinum-palladium printing, that was invented in the times of his grand-grand father in 1873.

. His art is an attempt to fill in the lost past for the sake of the future.